Wikipedia has the following definition for combination:

In mathematics a combination is a way of selecting several things out of a larger group, where (unlike permutations) order does not matter. In smaller cases it is possible to count the number of combinations. For example given three fruit, an apple, orange and pear say, there are three combinations of two that can be drawn from this set: an apple and a pear; an apple and an orange; or a pear and an orange. More formally a k–combination of a set S is a subset of k distinct elements of S. If the set has n elements the number of k-combinations is equal to the binomial coefficient

The binomial coefficient indexed by n and k is denoted

. The formula below, for evaluating binomial coefficients, uses factorials. 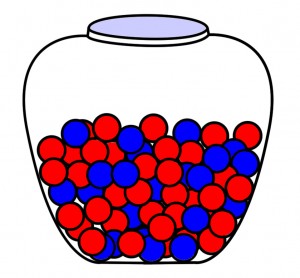 Additionally, I have encountered a similar problem that asks how many ways a grid can be traversed from the top-left corner to the bottom-right corner, with the possibility of moving in only two directions, right or down. Considering that all traversals will have the same number of moves in each of the allowed directions, this problem is analogous to the problem specified above, as the answer can be derived by calculating the number of ways to order the moves. In the picture below, there must be four moves in the down (D) direction and six moves in the right (R) direction. To calculate the number of possible ways to traverse the grid, we can calculate the number of ways to arrange the letters D and R, where there are four Ds and six Rs.

multiplied by the number of different ways of distributing the k successes and (n-k) failures, which I like to view as the number of ways that the letters p and q can be arranged.

Since x = n-y and y=n-x, the equation above can be rewritten in the following ways.

The answer lies in the way that we think about the problem. Instead of only thinking about the number of different ways that we can order the marbles, let’s think about the different places that we’ll put the marbles in a lineup, and give each place a number (or letter, or some other position identifier). Since there are n total marbles, we know that there must be n total places in the lineup.

combinations of y places out of n.

One reply on “Intuitive Interpretation of Unexpected Binomial Coefficients”